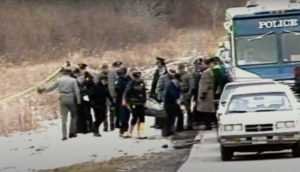 Psychiatrist Dr. Dorothy Otnow Lewis has dedicated her career to the study of murderers, seeking answers to the question of why we kill. CRAZY, NOT INSANE, directed and produced by Academy Award(R)-winner Alex Gibney (HBO’s “Agents of Chaos” and “The Inventor: Out For Blood in Silicon Valley”) debuts WEDNESDAY, NOVEMBER 18 (9:00-11:00 p.m. ET/PT).

This provocative documentary explores, like a scientific detective story, Dr. Lewis’s lifelong attempts to look beyond the grisly details of homicides into the hearts and minds of the killers themselves. Review here.

An official selection of the 2020 Venice International Film Festival, the documentary profiles Dr. Lewis and her research, includes videotaped death row interviews, and examines the formative experiences and neurological dysfunction of such infamous murderers as Arthur Shawcross and Ted Bundy, challenging the very notion of evil and proposing that murderers are made not born.

A well-respected psychiatrist and author, Dr. Lewis began her career working with children, including violent juvenile offenders. Her exposure to the testimony of childhood physical and sexual abuse led her to explore the way that trauma in childhood – often coupled with some neurological damage – can sow the seeds of murderous impulses in adults.

Those insights led her to become an expert in dissociative identity disorder (formerly known as multiple personality disorder) as she observed first-hand the way in which the killers she examined would switch between alternate personalities – or “alters” as she calls them – in the course of her examinations. While Dr. Lewis’s conclusions were often dismissed by others, including by well-known forensic psychiatrist Park Dietz, her videotapes of her death row interviews show meaningful transformations between “alters” developed in childhood, often as a way to endure and sometimes avenge, the pain they suffered.

Among Dr. Lewis’s most well-known cases is Arthur Shawcross, who was convicted in 1991 for the murder of eleven women. While Lewis’s videotaped exchanges with Shawcross show him inhabiting the alters of his vengeful mother and a 13th century cannibal, Shawcross was found sane and guilty in a trial by jury. Lewis was also one of the last people to interview Ted Bundy just before his execution. In an audiotape featured in the film, Bundy was unusually candid with the psychiatrist, revealing new details that upend the conventional wisdom about him. One of Lewis’s regrets is that she was never able to examine Bundy’s brain for clues to what made one of the world’s most infamous serial killers.

CRAZY, NOT INSANE is a stylistic departure for Gibney, who uses an eclectic mix of cinema verité, videotapes of psychiatric evaluations, hand-drawn animation and home movies in order to explore the complexities of the human mind. Lewis’s literary voice is read by actress Laura Dern (HBO’s “Big Little Lies” and “The Tale”) to bring further insight into Lewis’ career and her cases through her writings. From images of Dr. Lewis scribbling on legal pads in her unruly living room to studio art classes she takes in life-drawing, Gibney’s portrait of Lewis intends to show a woman of limitless curiosity willing to explore places others are unwilling to go.

In addition to Shawcross and Bundy, other high-profile convicted murderers and death row inmates assessed by Dr. Lewis include Mark David Chapman, David Wilson, Marie Moore and Joseph Paul Franklin. The film also includes a videotape of Dr. Lewis’s interview with “traveling executioner” Sam Jones, an electrician who also administrated hundreds of death penalty sentences. While claiming he “zapped” convicted killers in the electric chair without regret, Jones displays a collection of disturbing paintings he made after every execution, which reveal his inner turmoil.

The title, CRAZY, NOT INSANE, refers, in a colloquial way, to the conflict that the legal system – framed by demands for justice that can devolve into a desire for revenge – has with the world of medical science in defining grave mental illness. For many years, Dorothy testified in death penalty cases about whether convicted murderers were sane enough to be executed. Her insights and forensic skills helped change the laws and the way that death penalty lawyers approach their clients’ cases.

The film also explores the death penalty itself, highlighting the research that indicates that states with the death penalty tend to have higher murder rates than those without, questioning the theory of the death penalty as a deterrent to violence. The film asks an important question: once dangerous killers are locked away and the public is protected, why is society so determined to execute these human beings?

The film will be available on HBO and to stream on HBO Max.