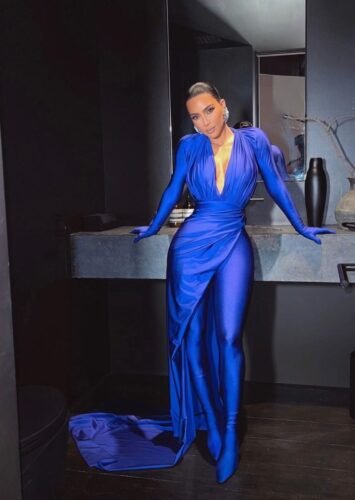 Kim Kardashian has passed the baby bar exam at law school on her fourth attempt. The 41-year-old reality star – who has been working to become a lawyer since 2018 had to pass the First-Year Law Students’ Examination, nicknamed the “baby bar exam” before being able to continue with her studies.

She wrote on Instagram: “OMFGGGG I PASSED THE BABY BAR EXAM Looking in the mirror, I am really proud of the woman looking back today in the reflection. For anyone who doesn’t know my law school journey, know this wasn’t easy or handed to me. I failed this exam three times in two years, but I got back up each time and studied harder and tried again until I did it!!! (I did have COVID on the third try with a 104 fever but I’m not making excuses.” (sic)

The SKIMS founder then went on to pay tribute to her late father, Robert Kardashian, who was well known as the defense attorney during the murder trial of footballer O.J Simpson before his death from cancer in 2003 aged 59 noting that he would have been her “biggest cheerleader.”

As she wrapped up her post, Kim urged her 200 million followers to believe they too can achieve as long as they set their mind to something.

She wrote: “Bottom line is don’t ever give up even when you are holding on by a thread, you can do it!!!!! Set your mind to it and get it done because it feels soooooo good once you get to the other side.”

The reality star’s mother and “momager” Kris Jenner, 66, was quick to weigh in with her congratulations as she took to her own Instagram to gush about Kim’s success.

She wrote: “Congratulations to my beautiful Kimberly for passing the Baby Bar!!!!! What a testimony for never giving up, following your dreams and being persistent and totally focused.” (sic)