PBA: No replacement yet for Magnolia in spite of Travis injury 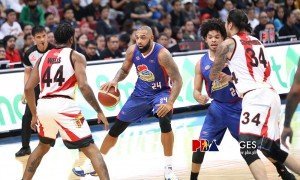 Travis exited the San Miguel-Magnolia game last Friday at the Mall of Asia Arena with under 5 minutes left in the 4th quarter as he twisted his ankle.

Speaking to ESPN5’s Eros Villanueva, the Magnolia head coach said the team is not yet pushing the panic button.

“Even if we have a backup, we know he won’t arrive fast enough. Our physical therapist said we’re still positive that they can still find a way and that maybe it won’t be that bad.”

Travis, who was seen on a wheelchair as he exited the MOA Arena, brushed off speculations that it was a severe injury right away.

The Hotshots are at 3-2 in the team standings after the loss. They will play Blackwater next on Wednesday, October 16.

Travis led them to the Governors’ Cup title last season.