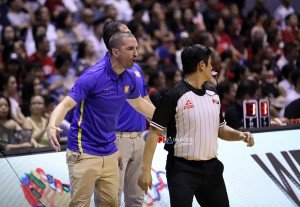 TNT KaTropa consultant Mark Dickel said in a report that he had kept an eye on Almond Vosotros in the last 3 to 4 months, and that he is lucky to finally have the scoring guard with the team.

Vosotros, a capable scorer out of La Salle, finally got the chance to suit up for the KaTropa in the East Asia Super League where the team finished 1-1.

“That’s someone that for the last 3-4 months we’ve been really interested in. And he kind of proved now that he can perform and that’s another good player that we have.”

“I think we’re very lucky to have him. He’ such an unselfish player, too, and defensively he’s already clicked in and we’ve known how exactly how we need him to play.”

Dickel could definitely use Vosotros as a back-up for Jayson Castro to preserve his minutes for the Governors’ Cup and keep him fresh should TNT go on a deep playoffs run once more.

A draft selection of the Blackwater Elite un the 2015 PBA Draft, Vosotros will have his 2nd shot at proving he belongs to the PBA.

He was once a part of Thai basketball teams and recently, the Caloocan Supremos in the MPBL.