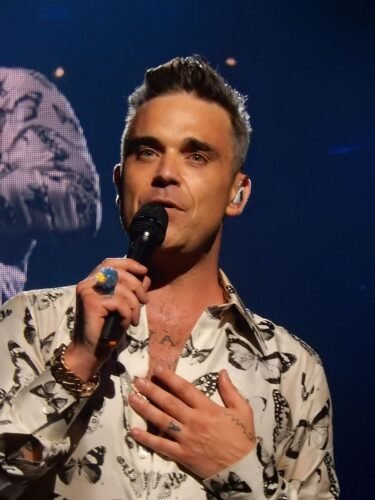 The ‘Angels’ hitmaker has never managed to match the success Stateside that he’s enjoyed in his native UK, but it’s said his upcoming big-budget film ‘Better Man’ – which is being directed by ‘The Greatest Showman’ filmmaker Michael Gracey – could be his ticket to superstardom in the US.

An insider told the Daily Mirror newspaper: “Early indications are it may really cut through to US audiences, not least as the people in place on it have such pedigree.

“Movie chiefs think the script – essentially a stirring story about an underdog catapulted to fame – will really resonate, even those who may not know much about Robbie himself.”

While Robbie previously “gave up” and enjoyed his anonymity in the US, he has become more focused on cracking the country.

Back in 2019, he said: “I spent years trying to break America and then I just gave up and thought, ‘I can come here unrecognized.’

“But now I’ve changed my mind. I want everyone in America to know my name. I want Jennifer Aniston to know who I am.”

When it comes to ‘Better Man’, Robbie is expected to appear as himself in the picture, which will tell the story of his rise to fame and the experiences that shaped him as he became a huge star on the back of hits with Take That and a successful solo career.

Read: Daniel Radcliffe has grown his own moustache for Weird: The Al Yankovic Story

Michael has penned the script for the flick alongside Oliver Cole and Simon Gleeson and revealed that the movie came about after hours of conversations with the ‘Rock DJ’ star and through his determination to tell the story of an “everyman”.

The filmmaker said: “Unlike some people who were born prodigies or musical geniuses and you follow the narrative of the world catching up to their brilliance, this isn’t that story.

“Robbie Williams is that everyman, who just dreamed big and followed those dreams and they took him to an incredible place. Because of that, his is an incredibly relatable story. He’s not the best singer, or dancer, and yet, he managed to sell 80 million records worldwide.”