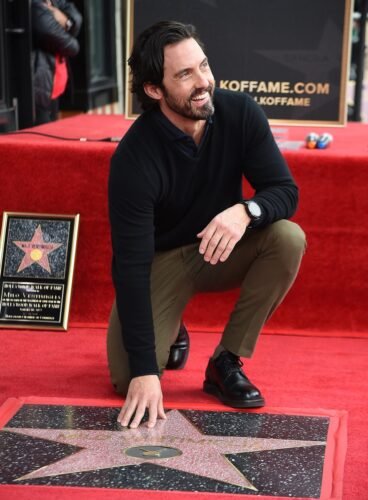 Milo Ventimiglia has received his star on The Hollywood Walk of Fame. The ‘This Is Us’ actor’s star was placed next to Mandy Moore’s at 6562 Hollywood Blvd, who plays his on-screen wife in the hit US drama.

Milo was joined by his co-star Jon Huertas and ‘Gilmore Girls’ creator Amy Sherman-Palladino as he was bestowed with the honour.

The star made his acting debut on ‘The Fresh Prince of Bel-Air’ in 1995.

In 2001, the 44-year-old star landed his breakthrough role as Jess Mariano on ‘Gilmore Girls’.

He was further propelled into the spotlight as Peter Petrelli in the superhero drama ‘Heroes’, before going on to play Jack Pearson on ‘This Is Us’ in 2016, for which he received the Screen Actors Guild Award for Outstanding Performance by an Ensemble in a Drama Series prize twice.

On the big screen, Milo landed his breakthrough movie role as Rocky Balboa’s son in the sixth installment of the ‘Rocky’ franchise, 2006’s ‘Rocky Balboa’, a role he reprised for ​2018’s ‘Creed II’.

Speaking during the live-streamed ceremony, Milo dedicated his star to his colleagues.

He said: “This star represents a large group of people.

“It may say Milo Ventimiglia, but it is actually made up of 26 years of names both in front of and behind the camera professionally and personally.”

Prior to the unveiling, Milo insisted that while he’s had “good fortune” during his 26 years in the acting business, he’s always “looking forward” to what’s next.

“I know some people when they’re walking away and moving on from those iconic roles that they play, they really try hard to get away from them.

“I think I’m just looking forward to what’s coming my way and take each man that I’ll be playing as an individual and grow them and build them and create them just like I did with Jack or Jess [Mariano on ‘Gilmore Girls’] or Peter [Petrelli on ‘Heroes’] or any of the other roles that I’ve played for 26 years on TV.

“I’ve had a very fortunate career.”