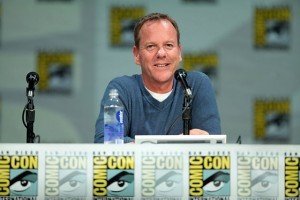 Produced by SHOWTIME and Lionsgate Television, the series is executive produced by Cathy Schulman (Crash), who also serves as showrunner, and Susanne Bier, who will direct all of season one. In addition to Davis, the series is also executive produced by Julius Tennon, Andrew Wang, Jeff Gaspin (Rhythm + Flow) and Brad Kaplan (Mr. Church), and created by author Aaron Cooley (Four Seats: A Thriller of the Supreme Court), who will write several of the episodes and executive produce. The announcement was made by Amy Israel, Executive Vice President, Scripted Programming, Showtime Networks Inc.

THE FIRST LADY is a revelatory reframing of American leadership, told through the lens of the women at the heart of the White House. In the East Wing of the White House, many of history’s most impactful and world-changing decisions have been hidden from view, made by America’s charismatic, complex and dynamic First Ladies. This series will peel back the curtain on the personal and political lives of three unique, enigmatic women, tracing their journeys to Washington through interweaving storylines with an enlightening intimacy, with season one focusing on Michelle Obama, Betty Ford and Eleanor Roosevelt. The series also stars Aaron Eckhart (Wander) as President Gerald Ford and Dakota Fanning (The Alienist) as Susan Elizabeth Ford.

Franklin Delano Roosevelt (FDR) was the 32nd president of the United States, from 1933 until his death in 1945, and the only U.S. president to serve for more than two terms. He married his fifth cousin Eleanor Roosevelt in 1905, and together the couple became the central figures in world events during the first half of the 20th century, eventually building the New Deal Coalition that defined modern liberalism in the U.S. In 1921, Roosevelt contracted polio, and his legs became permanently paralyzed. Unstoppable even after that, FDR is revered as one of the nation’s greatest presidents.

Kiefer Sutherland is best known for portraying CTU agent Jack Bauer in the critically acclaimed television drama series 24. He received a multitude of awards for his performance, including an Emmy and two SAG Awards for Best Actor in a Drama Series. He reprised the role for 24: Redemption, a made-for-television movie that went on to earn five Emmy nominations, including one for Sutherland for Best Actor in a Television Movie or Miniseries. Next, Sutherland will star and executive produce the upcoming untitled espionage drama by Glenn Ficarra and John Requa for Paramount+ and produced by CBS Studios. Sutherland’s other notable film and television credits include: Designated Survivor, Melancholia, Dark City, A Few Good Men, Flatliners, Young Guns, Young Guns II, The Lost Boys and Stand By Me.