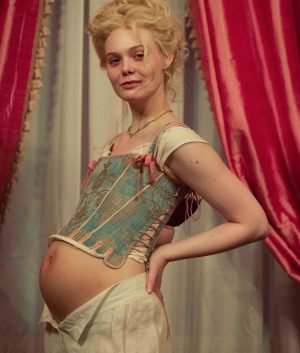 Elle Fanning has given fans a glimpse of her fake pregnant belly in the second series of ‘The Great’.

The 22-year-old actress plays Catherine The Great in the comedy drama series and took to Instagram to give fans a sneak preview of her pregnant belly that will be seen in the upcoming second season.

Elle captioned the snap: “Cooking up something special for season 2 #TheGreat #firstlook (sic).”

The ‘Maleficent’ actress stars alongside Nicholas Hoult as Emperor Peter III of Russia in the show, and the actor recently admitted that he “got the giggles” when the pair filmed sex scenes together.

The 31-year-old actor said: “Those scenes are the hardest not to laugh in: I get the giggles, having the physical comedy on top of the weird conversations.

“But even though everyone wants to talk about the sex scenes, and there are a few, they are always undercut. The main focus of them is unromantic.”

Nicholas also explained how he had to “play a trick” on his brain to shoot one of his nude scenes.

He said: “I remember reading the script and saying, ‘Aaaaargh, Tony, I’m not sure about this one.’ Because that hallway is long and busy; the hallways are where people hang out and mingle in the palace.

“We had a debate about how many supporting artists would come in that day. It was originally 70 people in the corridor. I said, ‘Can we get it down to about 30?’