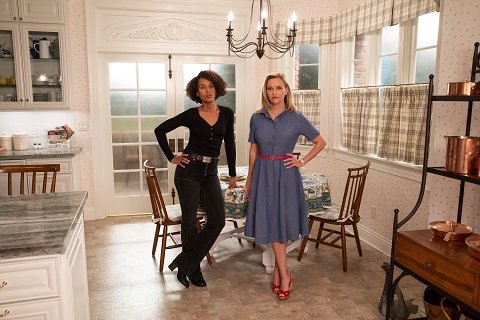 Reese Witherspoon and Kerry Washington are starring in a new series on Hulu titled “Little Fires Everywhere.” The show, set for a 2020 debut, is currently filming and a first look photo from the set has been released as a teaser.

“Little Fires Everywhere” is based on the book of the same title, released in 2017 and written by Celeste Ng. Per the logline, the story “follows the intertwined fates of the picture-perfect Richardson family and an enigmatic mother and daughter who upend their lives. The story explores the weight of secrets, the nature of art and identity, the ferocious pull of motherhood – and the danger in believing that following the rules can avert disaster.”

Witherspoon is on a roll this year as she is also behind two other TV shows. The latest season of Big Little Lies, which the actress produces and stars, is currently running on HBO.

In the fall, Witherspoon will star in The Morning Show with Jennifer Aniston and Steve Carrell for Apple TV. It’s also too early to tell if all these shows will score a renewal for another season.

Washington, on the other hand, has also been producing other productions. The actress starred for six seasons in the “Scandal.” This will be the first TV show she’ll star in after reaping success from the ABC drama series.