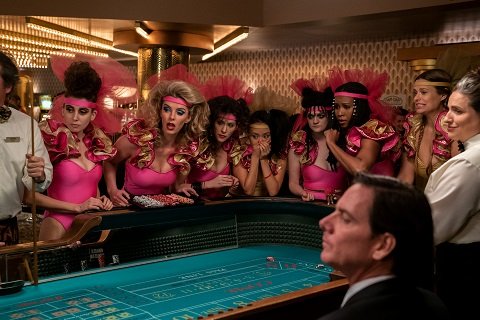 The campy Netflix series “GLOW” season 3 has finally landed a return date. The show will be streaming all 10 episodes of its third season on the platform beginning Friday, August 9. The first and the second season continue to run on Netflix.

“GLOW” season 3 will have the cast traveling to Las Vegas for a series of shows.

“We didn’t think Vegas was a purely optimistic place. It’s a place that, at least for us, makes our hair go up on our arms as in, ‘Oh no, what’s going to happen there?'” showrunner Carly Mensch said in an interview with The Hollywood Reporter. “It’s a place that makes us deeply, deeply uncomfortable and that was exciting for us to take the story, and the women, there to see what happens.”

Below is the synopsis of “GLOW” season 3 from Netflix.

“GLOW” Season 3 follows the ladies of GLOW as they take the Vegas strip by storm. Now headliners at the Fan-Tan Hotel and Casino, the women quickly realize Sin City is much more grind than glitter. Ever the team cheerleader, Ruth’s passion for the show begins to take a backseat to her growingly complicated personal life. Debbie is making headway as a producer, but continues to be consumed with guilt over the distance between her and her son. As their residency wears on, the lines blur between performance and reality, and the cast find themselves struggling with their own identities both in and outside of the ring.

Expected to return for “GLOW” season 3 are:

“GLOW” debuted on Netflix in 2017 and has become a critically-acclaimed series. The show nabbed 10 Emmy nominations and a best supporting actress plum for Betty Gilpin.