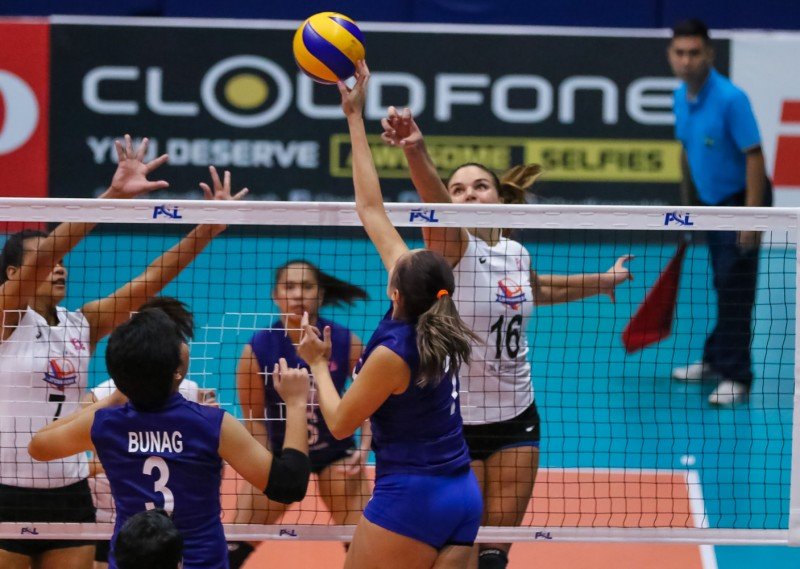 The Grand Prix, which officially starts on October 28, will be marked with a grand opening, including the public launch of the tie-up. KarchKiraly, head coach of the United States women’s volleyball team, will be among the special guests of honor during the opening.

Cloudfone users can let out their biggest cheers as they root for their favorite players and team as they watch the games live and for free at the Filoil Flying V Centre in San Juan.

Cloudfone devices, including feature phones and smartphones, become free Lower Box passes, and entitle all Cloudfone users to see the games during the Grand Prix Conference for free until the grand finale on December 16 as the best teams of the league go face-to-face for the championship rounds.

“They just have to show their phone units and register at the gate. We will always reserve a special section for all Cloudfone users inside the venue so that they can have the best seats, the best view to watch the games,” says PSL Events Director Dr. Ian Laurel.

This perk gives Cloudfone users unparalleled experience of the sport. There’s no need to buy tickets, which are being sold at the venue, at SM Tickets booths at SM malls, and online at smtickets.com.

“All they need to do is come over, watch, and enjoy the best volleyball action that we have–the best players, the best teams in women’s volleyball right now,” says Dr. Laurel.

The PSL games take place on Tuesdays, Thursdays, and Saturdays at the Filoil Flying V Centre in San Juan, and at different provinces in Luzon and Visayas. All games are aired live on ESPN5 at 4:00 to 8:00 PM, with replays of select matches on the next day.

“As the only professional volleyball league here, PSL believes in elevating the quality of the sport while making it more accessible for Filipinos from all regions to enjoy the games. Cloudfone is aligned with the same mission of bringing global standards in our products and making these available to all Filipinos. Both Cloudfone and PSL advocate for the same thing, to bring quality within reach of our customers and audiences,” explains Ray Caguin, Cloudfone Group Brand Manager.

Cloudfone has already established itself as a brand that provides more value beyond what the usual phones offer. “In all our partnerships, we ensure that we give customers an access to lifestyle wants and wishes. And we are always happy to get those values from our partnerships and give them to our customers. Now, with the PSL agreement, Cloudfone gives access to exciting and world-class quality volleyball games that Cloudfone users can enjoy for one full conference. Owning one of our feature phones, the Cloudfone Lite premier, which only retails at P499 already gives you unlimited access for the entire conference,” Caguin adds.

The league’s schedule is available on the PSL website philippinesuperliga.com.

The partnership could not have come at a better time. Aside from providing benefits to sports fans through free games for Cloudfone users, this new alliance introduces the tablet system to Philippine volleyball.

“We welcome the partnership of Cloudfone with PSL. This is a big support because in this Grand Prix, we are launching the tablet system for the competition. The timing of the partnership is really good,” says PSL President Ramon Suzara.

The PSL precedes other leagues in the country as it pioneers the Volleyball Challenge System, which requires the use of tablets. Cloudfone, as the PSL’s official technology partner, provides all the tablets needed to make this breakthrough possible.

The Volleyball Challenge System kicked off at International Volleyball Federation (FIVB) games in 2013 and was first adopted at an Olympic Games in Rio de Janeiro in 2016. It allows coaches to use a tablet to officially call timeouts and request challenges through video review, among others.

“This is being used now in international volleyball. There used to be just a button that coaches press underneath their seats when they need to call a timeout. But this time, we have a tablet,” says Dr. Laurel.

The PSL begins implementing the system in the Grand Prix’s semi-finals. All teams to make it to this stage are issued CloudfoneCloudpad tablets.

These developments showcase the two organizations’ common passion for innovation, volleyball, and elevating Filipinos’ skills and talents to international standards.

“The Philippine SuperLiga is the only league sanctioned by the Asian Volleyball Confederation (AVC) and the FIVB,” says Dr. Laurel. “We want to keep up with the standards that they set. We follow competition regulations like an international governing body.”

Fans of the sport and the brand alike can know more about Cloudfone’s products and services by approaching Cloudfone booths installed at game venues or visiting cloudfone.com.ph. The company offers a wide range of devices such as the recently launched Next Infinity Series boasting screens with an 18:9 aspect ratio.

Expect equally exciting announcements about Cloudfone and their partnership with PSL as the conference progresses.