Ghana FC tasted their first defeat of the Season 4 in the hands of Mondo International, 2-1. Both teams were tied at 1-1 at full time and Mondo’s Jangobah Johnson scored the golden goal in extra time for the victory.

“All our hard work paid off. Our first game, we weren’t very tuned in yet. We weren’t synced in but we proved our worth. Today was worth it. We played our hearts,” said Mondo International Academy founder and coach Butch Mondenedo. 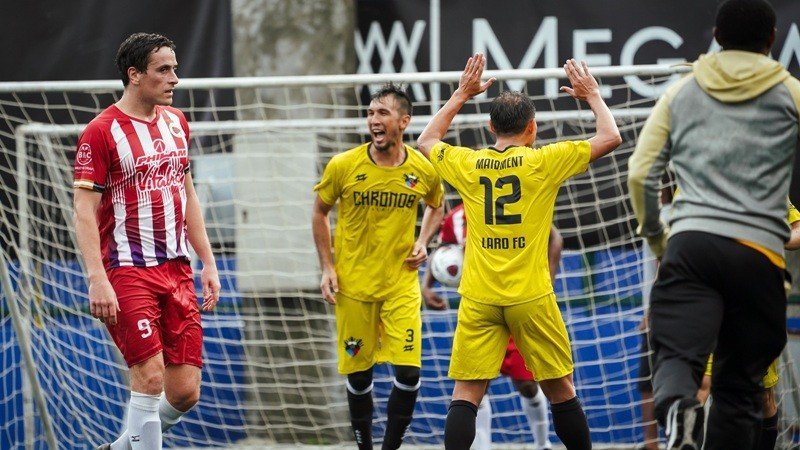 “The key thing is we played our tactics, we played our game. That is the one thing that we didn’t implement on the first game. The first game was very difficult because we are feeling out each player. Now, that the players are training more often, we are connecting much better,” shared Mondenedo on how they overcame Ghana FC.

In another extra-time thriller, Laro FC’s Kevin Skinker scored the lone goal of the match to defeat Matu Deportivo. Laro FC is one of the teams that still have an unblemished record after Match Day 2.

“The good energy of the team, that was important. We got good coaching, good experience and the young guys stepped up today,” said Laro’s Aly Borromeo. “It is good to come off with a clean sheet today at the same time we can’t be too overconfident. We look forward to play with the big boys like Super Eagles and Ghana in the next few rounds.”

On the other hand, Real Amigos and Super Eagles dominated their opponents. DMatsunaga experienced their first loss of the season against Real Amigos, 5-1, while Monte Manila falls to 0-2 after losing to the Super Eagles, 1-6. Both winning teams want to make a statement in their Match Day 2 wins.

“Two wins, it is very important for our confidence but moving forward, we want the teams to talk about us. We want them to talk if we are the team to beat or not,” said Real Amigo’s head coach Lerche on the statement win.

“We just needed to make a statement today,” said Super Eagles head coach Danny Cross who lost their opening day game against Ghana FC. “From now on, the momentum is on. Last weekend, was disappointing but that is football. Today, we got the victory, we are happy and good to go.”

Tondo FC registered their first win of Season 4 with a tough match against Futbol Funatics, 2-1. Roberto Corsame and Leonardo Kabalungan each scored goals for Tondo FC before the Futbol Funatics scored one late in the end but time ran out for a comeback.

“We addressed the stamina. For the past three training sessions, we build up our stamina,” said Dennis Balbin of Tondo FC. “This win is important because it will bring more momentum for our team and brings more motivation.