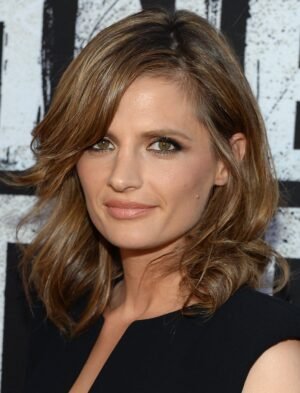 The former ‘Castle’ star and her husband Kris Brkljac secretly gave birth to their first child together late last year.

Her rep told Us Weekly: “They had a baby this winter and have been enjoying the time since cocooning as a family.”

It comes after the 44-year-old star dropped a huge hint she and Kris had become parents last weekend.

She shared a picture of Kris and wrote: “Happy Fathers Day to all the Pappys out there, but an especially Happy Pappy’s Day to my love. Best decision I ever made was joining forces with you. We love you and are so glad we get to share this life together. #Blessed”

Stana’s Instagram post was her first since October 23rd, when the star announced she would be taking a break from the photo-sharing platform.

She posted at the time: “Alright, folks. It’s been fun, but the work ahead is a mile-high. So, for now, adieu. See you sometime in the new year, hopefully with fun news to share!”

Stana – who was born in Canada, and has Serbian parents who emigrated from Croatia – and Kris married in April 2015 on the Dalmatian Coast in Croatia.

She is best known for playing Kate Beckett in the ABC romantic-crime series ‘Castle’ from 2009 to 2016.

Announcing her departure, ABC said in a statement at the time: “Kate Beckett has been a beloved character on our hit series ‘Castle’ for the past eight years. We are grateful for Stana Katic’s talent and dedication to the series and we hope to continue our relationship.”

After the news was revealed, Stana Katic wrote on Twitter: “To the fans: thank you for your support. I love you.”