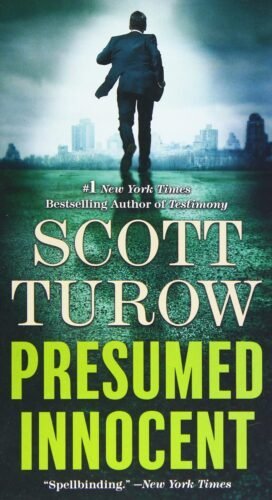 Apple TV+ revealed that it has landed “Presumed Innocent,” a new eight-episode limited series based on the acclaimed book of the same name by Scott Turow that will be reimagined for the screen by master storyteller David E. Kelley (“Big Little Lies, “Nine Perfect Strangers”), who will serve as showrunner and executive producer alongside executive producers Dustin Thomason (“Castle Rock”), J.J. Abrams and Bad Robot’s Ben Stephenson.

Inspired by Scott Turow’s beloved courtroom thriller, “Presumed Innocent” is the story of a horrific murder that upends the Chicago Prosecuting Attorneys’ office when one of its own is suspected of the crime. Multi-Emmy Award winner Kelley reimagines “Presumed Innocent,” exploring obsession, sex, politics, and the power and limits of love, as the accused fights to hold his family and marriage together.

Apple TV+ offers premium, compelling drama and comedy series, feature films, groundbreaking documentaries, and kids and family entertainment, and is available to watch across all your favorite screens. After its launch on November 1, 2019, Apple TV+ became the first all-original streaming service to launch around the world, and has premiered more original hits and received more award recognitions faster than any other streaming service in its debut. To date, Apple Original films, documentaries, and series have been honored with more than 200 wins and 900 award nominations and counting.

Read: Tom Holland says it will be an ‘an honour’ to host Oscars with Andrew Garfield and Tobey Maguire