‘The Stand’ Limited Event Series to Air on CBS All Access 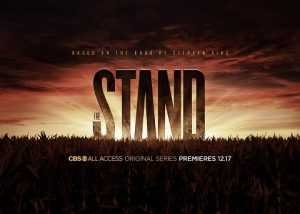 THE STAND is Stephen King’s apocalyptic vision of a world decimated by plague and embroiled in an elemental struggle between good and evil. The fate of mankind rests on the frail shoulders of the 108-year-old Mother Abagail (Whoopi Goldberg) and a handful of survivors. Their worst nightmares are embodied in a man with a lethal smile and unspeakable powers: Randall Flagg (Alexander Skarsgård), the Dark Man.

Based on King’s best-selling novel of the same name, CBS All Access’ THE STAND will close with a new coda written by the famed author himself.

“During the two years we spent making THE STAND, we all felt the responsibility of adapting what may be the most beloved work of one of the world’s most beloved storytellers, but none of us could have imagined that Stephen King’s 40-year-old masterpiece about a global pandemic would come to be so eerily relevant,” said Benjamin Cavell, showrunner and executive producer. “We’re honored to tell this sprawling, epic story, including a new coda that Stephen King has wanted to add for decades. We’re so proud of this show and its attempt to find meaning and hope in the most uncertain of times. We can’t wait to share it with the world.”

THE STAND joins CBS All Access’ growing slate of original series that currently includes THE GOOD FIGHT, THE TWILIGHT ZONE, TOONING OUT THE NEWS, NO ACTIVITY, WHY WOMEN KILL, INTERROGATION, THE THOMAS JOHN EXPERIENCE and TELL ME A STORY, as well as upcoming series THE MAN WHO FELL TO EARTH, THE HARPER HOUSE, GUILTY PARTY and “SpongeBob SquarePants” series KAMP KORAL. CBS All Access is also the exclusive domestic home to STAR TREK: DISCOVERY, STAR TREK: PICARD and the animated series STAR TREK: LOWER DECKS and the U.S.S Enterprise set series STAR TREK: STRANGE NEW WORLDS.

CBS All Access is ViacomCBS’ direct-to-consumer digital subscription video on-demand and live streaming service. CBS All Access gives subscribers the ability to watch more than 20,000 episodes and movies on demand – including exclusive original series, current and past seasons of hit shows from the CBS Television Network and growing libraries from brands across the ViacomCBS portfolio including BET, Comedy Central, MTV, Nickelodeon, Smithsonian and more, as well as a wealth of films from Paramount Pictures. The service is also the streaming home to unmatched sports programming, including every CBS Sports event, from golf to football to basketball and more, plus exclusive streaming rights for major sports properties, including some of the world’s biggest and most popular soccer leagues. CBS All Access also enables subscribers to stream local CBS stations live across the U.S. in addition to the ability to stream ViacomCBS Digital’s other live channels: CBSN for 24/7 news, CBS Sports HQ for sports news and analysis, and ET Live for entertainment coverage.

The service is currently available across all major device platforms including online, mobile and connected TV and OTT platforms and services. Versions of CBS All Access have launched internationally in Canada and Australia (10 All Access), with unique but similar content and pricing plans. For more details on CBS All Access, please visit https://www.cbs.com/all-access.