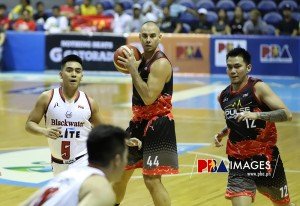 And why not? On an individual performance level, 6-foot-4 bruiser played center in the 2011-2012 Philippine Cup, and went on to average a double-double.

As for the team, Powerade was the 8th seeded squad of the conference, but stunned the top-seeded B-Meg Llamados of then new mentor Tim Cone, to advanxe to the semi-finals.

Anchored by Gary David’s exploits, Powerade took Rain or Shine to 7 games and eventually made the Philippine Cup finals, although they bowed down to Talk ‘N Text.

“A lot of fans were telling me that they remember the Cinderella team a lot. And you know, those were my best numbers. I was averaging a double-double that year. So that’s what I remember the most.

At 36 years old, Kramer did admit he is still healthy and in a good shape to go to war against the rest of the PBA frontliners today, but added it he considered a lot of factors before deciding to call it a career.

Kramer said planned his retirement for months, and said he did not want to get to a point where he is physically just too old or challenged to play.

“It wasn’t a spontaneous thing. I planned this for the past year and my plans were solidified in the past few months.

But it seemed like it has become a notion for almost every basketball player that, ‘Will you wait until something’s really painful until you give up? Until you’re always taking painkillers?’ I’m not like that.”

Drafted by FedEx, Kramer played for 8 teams in the PBA, including Barangay Ginebra and San Miguel.