Romeo Travis brushes off significance of showdown vs San Miguel: ‘It’s not a playoff game’ 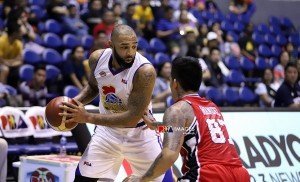 Ahead of what is expected to be a huge showdown between the undefeated San Miguel Beermen and defending PBA Governors’ Cup titlists Magnolia Hotshots Pambansang Manok, Romeo Travis isn’t treating the game extra special.
With the Beermen undefeated at 3-0 behind Dez Wells’ spectacular play and Magnolia also doing well at 3-1n the upcoming game is considered to be an intriguing match-up that could be preview of a playoff pairing or even a Finals series.

But the Magnolia import told the PBA official website that the upcoming game will feel just like any other game, and that’s how he is treating it.

“It’s still a lot of season left. A lot of things can happen.

You just go out here and play the game, see what happens and take it for what it’s worth. It’s not a big game, it’s not a playoff game and it’s not going to have playoff implications.”

The game could pretty much be a barometer between the 2 teams to see how well they stack up against each other, but Travis remains firm on his opinion that it will just be another regular assignment for the Hotshots.

“It means something but it’s not a really huge game, you know. So we gonna go out here, play hard and see what happens. If we win, great. If we don’t, we gonna learn.”