Two dramas have recently scored a renewal on cable. “Animal Kingdom” is getting a fifth season on TNT, while “Younger” will return for a seventh season on TV Land. Both shows are running their current seasons this summer.

Ellen Barkin leads the cast of “Animal Kingdom,” from producer John Wells, as the matriarch of a crime family. Sutton Foster and Hilary Duff star in “Younger” from creator Darren Star, which delves on a woman pretending to be younger to land the job she wanted.

Below are the press releases for these two series.

TNT, a division of WarnerMedia Entertainment, has renewed its powerhouse drama Animal Kingdom for a fifth season. The popular series continues to grow its fanbase, reaching nearly 18 million viewers this season so far across all platforms, defying industry trends where the typical returning series is down double digits. Season four of Animal Kingdom premiered on par with the season three average and the series is one of this year’s top 10 cable dramas (P18-49, L+7).

Animal Kingdom season four stars Emmy(R) and Tony(R) winner Ellen Barkin as the matriarch of the Cody crime family along with Shawn Hatosy, Ben Robson, Jake Weary, Finn Cole and Sohvi Rodriguez. Emily Deschanel also joins the cast this season in a recurring role. This season, Smurf (Barkin) is back on top reminding her boys who’s boss no matter whom she hurts. Trapped with Smurf and becoming increasingly unhinged, Pope (Hatosy) has found new and dangerous ways to deal with his anger. J (Cole) continues to scheme about how to take over the family business, Craig (Robson) plots one of their most difficult heists and Deran (Weary) is worried about his future with Adrian (Spencer Treat Clark). Outsiders move in to threaten the Cody’s fragile peace, including Angela (Deschanel), the former best friend of J’s deceased mother and a recovering junkie, who tries to snake her way back into the family’s good graces. And for the first time audiences meet a young Smurf (Leila George) and the original crew that started it all.

Animal Kingdom is produced by John Wells Productions in association with Warner Horizon Scripted Television. Emmy(R) winner John Wells and Eliza Clark serve as executive producers on the series. Animal Kingdom was developed for television by Jonathan Lisco and inspired by the award-winning Australian feature film written & directed by David Michod and produced by Liz Watts, who also serve as executive producers on the series.

TV Land is picking up the critically-acclaimed, Darren Star hit series Younger for a seventh season, it was announced today by Keith Cox, President, Development and Production, Paramount Network and TV Land. The news comes in the middle of its record-breaking sixth season, currently airing Wednesdays at 10:00 p.m. ET/PT.

Younger’s sixth season debuted on June 12 and recorded its highest-rated season premiere ever in the key P25-54 and W25-54 demos. It was also up +23% among total viewers, with 1.3 million tuning in to the season six premiere. The series remains the top sitcom in cable for the third year in a row among W25-54 and W18-49. 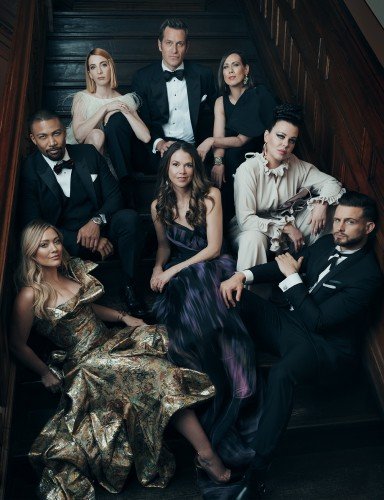 “Season after season, Younger has continued to reach new heights and build an incredibly loyal fan base,” states Cox. “We love this talented and amazing cast and can’t wait to see what Darren has in store for season seven.”

The series continues to be a media favorite: Entertainment Weekly said “Proving that not everything slows down in old age, Younger is back for its sixth season with even more drama and wit;” TV Guide noted “Younger just gets better with age;” and Entertainment Tonight remarked “Younger remains one of summer’s can’t-miss shows.”

Younger is created by Darren Star and stars two-time Tony(R) winner Sutton Foster with Hilary Duff, Debi Mazar, Miriam Shor, Nico Tortorella, Peter Hermann, Molly Bernard and Charles Michael Davis. The series’ passionate fan base has helped the series expand off the TV screen to include the five-star reviewed weekly podcast, Younger Uncovered, a weekly after-show entitled Getting Younger, and the launch of two books from Simon and Schuster entitled, Marriage Vacation and The Miseducation of Henry Cane. Younger also has an extensive global footprint sold across 162 countries and territories worldwide. With the news of a seventh season, Younger will be TV Land’s longest running original series.

Younger follows Liza Miller (Foster), a talented editor navigating the highly competitive world of publishing – while juggling the complications of mixing business with pleasure and facing the lie she created about her age to land her dream job. In season six, Kelsey (Duff) is leaning into her new role as publisher at the freshly minted Millennial Print, while Liza and Charles get acclimated to their new normal now that Charles (Hermann) is no longer running the business.

Younger, which films at the legendary Silvercup Studios in New York, is created, executive produced and written by Darren Star, with Tony Hernandez of JAX Media executive producing. Dottie Zicklin, Eric Zicklin and Alison Brown also serve as executive producers and writers on the series. Star is about to start production on his new Paramount Network series, Emily in Paris. The show will star Golden Globe-nominated actress Lily Collins as the titular Emily in the dramedy.