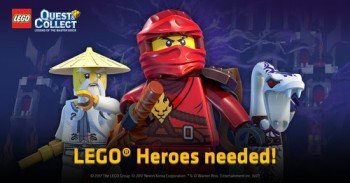 – Quest and adventure through a unique world filled with LEGO® bricks

“LEGO® Quest & Collect”, which focuses on the internationally treasured LEGO® brand and themes, is developed by Nexon in partnership with TT Games and The LEGO Group.

For the first time on smartphones and tablets, players can build their own collection of LEGO® Minifigures and playsets from multiple LEGO® product ranges including: LEGO® CITY, LEGO® MINIFIGURES™, LEGO® NINJAGO™, LEGO® CASTLE, LEGO® PIRATES and more.

The Unreal 4 engine was used to create “Brick World,” a world filled with LEGO® Bricks, which will be loved by all LEGO® fans. The game contains many action-packed quests over a variety of unique stages where heroes can team up to save Brick World from the evil “Mad Creator”, who is trying to conquer it by stealing the “Master Brick”.

“LEGO® Quest & Collect” was released in Korea and 14 other Asian countries including Hong Kong, Macau, Taiwan, Indonesia, Thailand, Vietnam and Malaysia (China and Japan excluded) on the Google Play Store and the Apple App Store. It supports five languages.