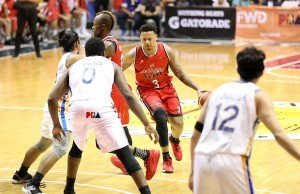 In a recent column by PhilStar’s Joaquin Henson, Sy said he is open to the idea of having other brands join the PBA even if there are current member teams that are rivals of the said brands or companies.

“Why not encourage rivalry in the PBA? … Imagine the excitement we generate if we had a game between Phoenix and Shell or Rain or Shine and Boysen or Globe and TNT?,” said Sy to Henson.

“We can bring the intensity of corporate rivalry to the court. To protect an existing franchise, we could charge a premium for a new franchise with a competing brand or even allocate a portion of the fee to the existing franchise.”

Under the current rules of the PBA, rival brands cannot join the league. Simply stated, other milk brands will not be able to join the PBA as long as Alaska is part of the league.

A recent name change by the Star Hotshots franchise to Magnolia Hotshots Pambansang Manok could have been a factor on why Chooks-to-Go has not pushed through with joining the big league.

Under Sy’s suggestion, other cosmetics or perfume brands may be able to join the league to compete with Blackwater.