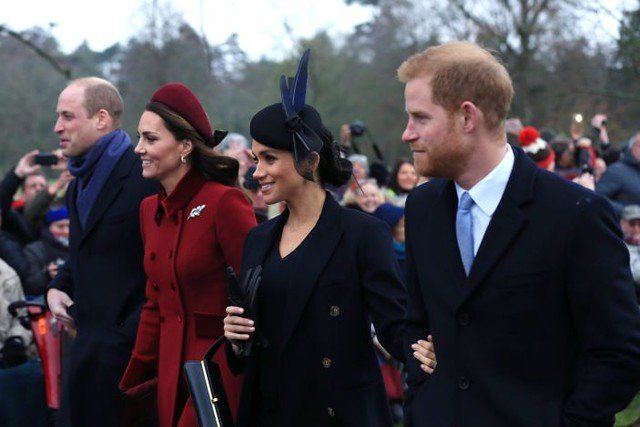 The Duke and Duchess of Sussex’s son and daughter, Archie and Lilibet Mountbatten-Windsor, are now reportedly technically a prince following the death of Queen Elizabeth.

The Duke of Cambridge is expected to become the Prince of Wales after his father was named King Charles III, MailOnline also reports.

Prince William, 40, is now heir to the throne of the United Kingdom after Prince Charles’ accession following the Queen’s death.

The royal’s wife the Duchess of Cambridge, 40, is also set to take on the new title of the Princess of Wales, according to MailOnline.

William is the oldest of the royals among the top eight in line and is followed by his three children Prince George, nine, Princess Charlotte, seven, and four-year-old Prince Louis, four.

Following the Cambridges are the Duke of Sussex, as well as his children Archie, three, and one-year-old Lilibet, followed by Prince Andrew and his two daughters Princesses Beatrice and Eugenie of York.

The update is expected as the Prince of Wales title is not Charles’ per se, but is conferred on the heir apparent, who then vacates the honor when he ascends to the throne.

“The title is only ‘merged in the crown’ and renewed at the Sovereign’s pleasure – which is why Charles became the 21st Prince of Wales not on the day of his birth, but rather aged nine in 1958.

“He was only ‘invested’ – in the ceremony acknowledging the creation of a new Prince of Wales – 11 years later in 1969.”

William and his wife are considered two of the most stable and grounded senior royals, with their April 2011 wedding watched by an estimated two billion people.

Charles’ wife Camilla Parker-Bowles, has been the Princess of Wales until now but has used the feminine equivalent of her husband’s Duke of Cornwall title, the Duchess of Cornwall.

The Queen gave her the title of Queen Consort in February in a huge sign she was preparing to pass the torch of her reign to her eldest son Charles.

Following the Queen’s death, Charles also becomes head of the Commonwealth, with her passing leaving Prince Edward, the Earl of Wessex, now 13th in line ahead of his two children with Sophie – James, Viscount Severn, 14, and 15-year-old Lady Louise Mountbatten-Windsor.