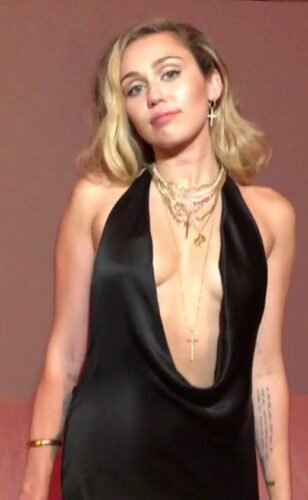 Singer Miley Cyrus has revealed she is back in the studio working on her next album.

The ‘Malibu’ singer made the announcement on social media as she fed her pigs, and she also shared news of a website relaunch, footage of a performance, and a new photoshoot to her 149 million followers

She captioned an Instagram image of her feeding her porkers: “Actual footage of me FEEDING THE CHILDREN with 1. The relaunch of #MileyWorld 2. An exclusive unedited live performance from @aclfestival 3. New photoshoot 4. Confirmation I’m in the studio working on the next record 5. a special announcement coming tomorrow! (sic)”

The 28-year-old star’s last record was ‘Plastic Hearts’, which she released in 2020.

Recently, Miley Cyrus opened up about her desire to “strive for greatness”.

She said: “I don’t even feel that it’s enough for me to be considered one of the best rock singers of this generation, because there’s not enough of them and I want more competition.

“Not only do I want to share my light, but I love competition.”

Her career began as a child star on the Disney Channel’s hit ‘Hannah Montana’, which ran from 2006 to 2011, where she played Miley Stewart, a regular teenage girl whose alter-ego Hannah Montana was an international pop sensation.

Last year, Miley admitted she always knew some of her controversial behavior, such as twerking at the MTV Video Music Video Awards in 2013 with Robin Thicke, and her nudity in her ‘Wrecking Ball’ music video, would “rile people up”.

She said: “I did a lot of this knowing I was going to rile people up.”