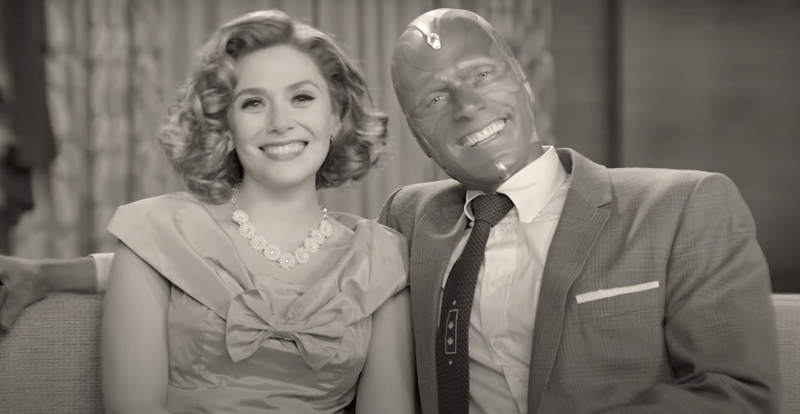 After much delay due to the pandemic, Disney+ and Marvel Studios announced that WandaVision will be ready for streaming on Jan. 15, 2021.

This Disney+ TV series has intrigued Marvel fans for months following the release of its first teaser in late September. Featuring the characters of Wanda Maximoff/Scarlet Witch (played by Elizabeth Olsen) and Vision (played by Paul Bettany), the TV show takes place after the Avengers: Endgame (2019) timeline.

The logline indicates that Wanda and Vision try to live like normal couples in a suburban town. As they attempt to hide their powers and start new decades, they apparently encounter TV tropes that indicate things are not what they seem.

The show is expected to be an escapist TV show with six episodes. However, Marvel Studios has been trying hard to keep the plot under wraps despite the trailer release along with the images.

Fans speculate that Wanda and Vision are either trapped by a supervillain or Wanda herself has set up this alternate reality. It’s been suggested that the supervillain to be introduced in this show will play a major part in the fifth Avengers movie.

Read: Disney’s ‘The Little Mermaid’ live-action to return to production

Matt Shakman directed all the episode with Jac Schaeffer as head writer.

“It’s always so appealing when outsiders find each other,” Schaeffer said of the two lead characters in an interview with Entertainment Weekly. “They’re both different with capital Ds. Wanda has so much pain, and Vision has so much curiosity.”

The year 2020 was supposed to kick off with Phase 4 of the Marvel Cinematic Universe with Black Widow and Eternals on the big screen and The Falcon and the Winter Soldier on Disney+. Due to the production shutdowns at the height of the pandemic, WandaVision was the only product that neared completion, hence it will bow on TV on Jan. 15, 2021.

“The show is a love letter to the golden age of television,” the head writer said. “We’re paying tribute and honoring all of these incredible shows and people who came before us, [but] we’re also trying to blaze new territory.”