CITY OF MANILA – UST students held symbolic tribute to Ondoy victims and heroes of the environment and pledged commitments to respond to the worsening climate crisis.

“Based on the latest Intergovernmental Panel on Climate Change (IPCC) report, we have less than 11 years to avert catastrophic climate change. We already know the consequences of this worsening climate crisis, and we can no longer put off ending the age of coal, one of the leading sources of our country’s GHG emissions,” said Atty. Avril de Torres of the Ecological Justice League of Youth Leaders (EJL), who organized the campus event. 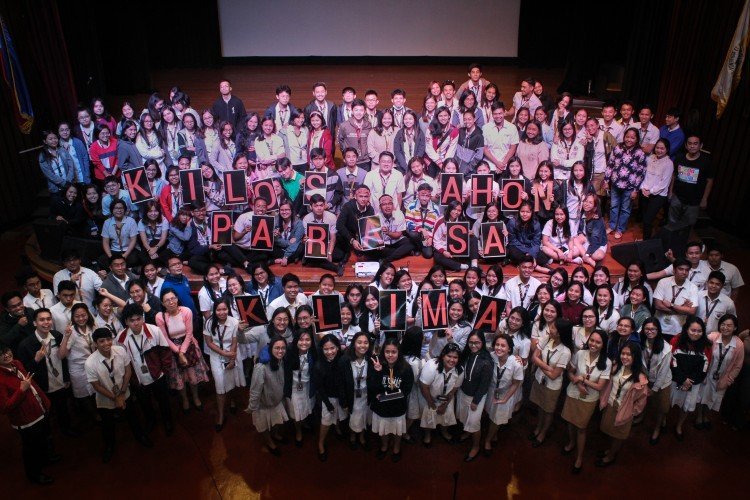 “Our victory against coal in Negros should be replicated across the country,” Miggy Yulo of Y4CH stated. “We dare Cusi,as well as other coal proponents in the country to respond with urgency to the call of the environment, the consumers, and the future generations: end coal now.”

This event was organized as part of the growing movement in the country against coal and fossil fuels, following the Diocese of Bacolod’s climate emergency declaration last Wednesday.

“Discussions on energy and consumer-related issues shouldn’t be done behind closed doors,” stated Krishna Ariola of MK-Negros. “Electricity costs and energy sources are concerns that the public should have a say in.”

Griderick Alila of EB Magalona Fisherfolk Alliance urged the local and national government to follow through with their commitment to support RE development, a cleaner and cheaper alternative to traditional energy sources such as coal.

This follows President Rodrigo Duterte’s statement in his 4th State of the Nation Address to end coal and fast-track renewable energy development in the country.

“We are the ones directly impacted by climate change. Our livelihoods suffer because of drastic changes in weather patterns caused by exploitative industries that pollute our air and water,” added Alila.

DUMAGUETE CITY – With the theme, BANGON: PARADA PARA SA KLIMA, the climate strike in Dumaguete City was marked by a protest parade where organizations stated their commitments on their end to tackle the climate crisis.

“We are mobilizing in Dumaguete City because people here need to be more conscious about the climate crisis. As a University town, Dumaguete should be at the forefront of climate action in Negros Oriental, and this climate strike serves as a platform for us to speak out about the climate and environmental demands, both in the local and national level, and to call for immediate and long-term solutions for the climate crisis,” said Jaya Ariola of the Silliman University Student Government Committee.

“It is not enough to just wake up. We need to rise up and actually do something. Like the sun, the wind, and the waves, we are a source of limitless energy. Let us not let the big polluters destroy the planet, along with our dreams and our futures. There is strength in numbers, and we will be unstoppable if we all resist together” she continued.

QUEZON – The youth from Atimonan, Quezon, where a 1,200 MW coal-fired power plant, also expressed their opposition to the dirty energy project.

“Quezon is teeming with biodiversity and natural resources which exist in harmony with the lives and livelihood of its residents. The 1,200 MW Atimonan coal project has led to massive displacement, loss of livelihood, and poses threats to the environment, health, and safety of the people. We hope that our leaders take this opportunity to show that they are sincere in caring for the environment and the people,” said Fr. Warren Puno, director of Ministry of Ecology at the Diocese of Lucena.