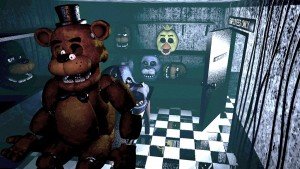 Chris Columbus, the director of two “Home Alone” movies from 1990 and 1992, has been tapped to direct the movie “Five Nights at Freddy’s.” The film will be based on the popular indie video game that Scott Cawthon created and released in 2014.

Jason Blum from Blumhouse, the production company of popular low-budget horror films like “Get Out” and “The Purge,” nabbed the film rights to the highly in demand adaptation from New Line Cinema under Warner Bros. Columbus will also serve as executive producer alongside Cawthorne and Blum.

Aside from “Home Alone,” Columbus is also known for his work as director of the first two “Harry Potter” movies, “Mrs. Doubtfire” and “The Help.” He started as a screenwriter for “The Goonies” and “Gremlins” in the 1980s.

The movie adaptation of “Five Nights at Freddy’s” was originally announced in 2015 under the Warner Bros. banner. Vertigo Entertainment and KatzSmith Productions were named producers, while Gil Kenan and Tyler Burton Smith were tasked as co-writers.

“The story really lends itself to being a movie, and it taps into a largely unexplored niche of horror that a lot of people will be able to relate to,” Cawthon indicated.

In January 2017, however, Cawthon announced a roadblock to filming and shelved the development. New Line Cinema opted to put the rights on turnaround that opened the doors for Blumhouse.

“Five Nights at Freddy’s” follows a security guard who fights off robots that wreck havoc at night. Gamers have to survive the rampage while locked in at a venue similar to Chuck E. Cheese.

The game, released on Microsoft Windows, Android and iOS, earned a massive following from mobile and PC game enthusiasts. It spawned six releases since, with “Freddy Fazbear’s Pizzeria Simulator as the latest from 2017. Three of the games are on iTunes top ten paid apps list.

“Five Nights at Freddy’s” also spawned novels and guidebooks. The movie adaptation has not release date for now.