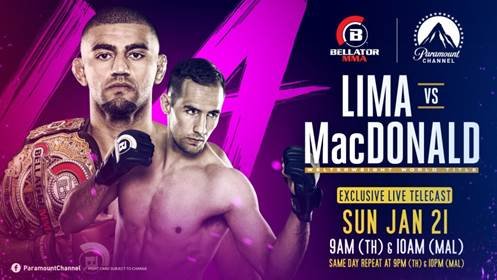 Packing a punch in 2018, Paramount Channel announced that it will be the exclusive new home to popular mixed martial arts franchise, Bellator. Paramount Channel will air Bellator’s upcoming world championship events from venues around the world starting off with the live telecast of the World Welterweight Champion title fight to kick-off the 2018 season, “Bellator 192” on 21 January. MTV Asia and MTVph will also get a piece of the action with the launch of a new Paramount-branded block, “MTV Presents: Bellator on Paramount”, which will showcase selected Bellator content, and cater to more MMA fans in the region.

“Bellator 192” from The Forum in Los Angeles is the title bout between Rory MacDonald and Douglas Lima. The event will also include the first round of the Heavyweight Grand Prix between two MMA icons, Quinton “Rampage” Jackson and Chael Sonnen.

“We understand that fans want to watch the action as early as possible and with Paramount Channel the new destination of Bellator, we are kicking off with the season opener fight live for the first time on the channel. Through a Paramount-branded block on MTV Asia, we are also extending the pure adrenaline of Bellator to more MMA fans around the region,” said Paras Sharma, Senior Vice President and General Manager for Southeast Asia, Viacom International Media Networks.

The inclusion of Bellator makes Paramount Channel a premium entertainment destination with great movies from Paramount studios as well as fight sports entertainment in its programming lineup. In 2018, Bellator MMA will present prime time combat sports events from venues in the US and across the globe. Besides live fights, viewers can look forward to “best-of” specials highlighting the most exciting scenes and iconic moments from the Bellator franchise to date. This content will be part of the ‘Action Wednesdays’ timebelt where Paramount Channel will combine the best of its reel life with action-packed movies, as well as real life with Bellator combat-sports competitions.

From iconic box-office hits to heart-pumping tournaments, Paramount Channel integrates creative curation and thematic programming to provide a unique and entertaining viewing experience for audiences of all ages.