Back with a vengeance with a 10-part series, airs every Tuesday starting 22 August

SINGAPORE, 10 AUGUST 2017 – The best of Asian stand-up comedy is out in full force and they are ready to take over! 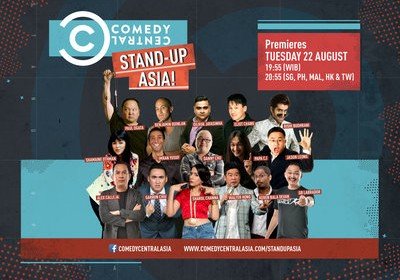 Comedy Central Stand-Up, Asia! premieres on Comedy Central in Asia on 22 August, Tuesday at 7.55pm (WIB) and 8.55 pm (PH/MY/SG/HK/TW), and is a 10-episode series airing every Tuesday for half an hour.

Paras Sharma, Senior Vice President and General Manager, Southeast Asia, Viacom International Media Networks, commented, “We saw solid viewership of Season 1 of Comedy Central Stand-Up, Asia! last year, which demonstrates that Asia originals have strong appeal with our audiences. This underscores our commitment to invest in original content and this season, we are spotlighting Asian comedy with a roster of the sharpest talents from around the world, and presenting new formats that will offer comedy fans an enhanced experience either watching live, on-air, or online through our various platforms.”

“Stand-up comedy in Asia is at its prime at the moment. In terms of comedy acts and the quality of material, Asia has developed in leaps and bounds to make her presence known in the international arena. This is beyond entertainment, but represents a change in perceptions and breaking of stereotypes,” concluded Rizal Kamal, CEO of LOL Events.

Pulling no punches, Comedy Central Stand-Up, Asia! was filmed in front of a live audience at HGH Convention Centre in Kuala Lumpur, Malaysia on 13 and 14 July 2017. It featured 16 of the most distinct Asian voices in comedy internationally – and celebrated Asian sensibilities, or the lack thereof! Talents include Imran Yusuf (UK), Paul Ogata (US), Eliot Chang (US), Papa CJ (India), Garron Chiu (Hong Kong), Alex Calleja (Philippines), Dilruk Jayashina (Sri Lanka), Jason Leong (Malaysia), and Sharul Channa (Singapore); and the full list of comics can be viewed at www.comedycentralasia.com/shows/standupasia.

The creation of the show is through the participation of partners such as Malaysia Major Events, Hotel Stripes Kuala Lumpur, HyppTV, and Grab; who have played a part in its production as well as helped to foster the comedy scene in Asia. For the second year in a row, Enrich by Malaysia Airlines is the ‘Official Airline Loyalty Partner’ for Comedy Central Stand-Up, Asia! Enrich has been a strong enabler to the growth of the comedy scene in Malaysia, by flying in international comedians from around the world.

Since the channel was launched across Southeast Asia in 2012, Comedy Central has become one of the fastest growing brands for VIMN, which is now available 24/7 in 20 Asian markets via 49 providers. Over the last four years, the channel has collaborated with local comedy clubs to develop featurettes, on-air promotions and marketing partnerships.

“We are very excited to collaborate with LOL Events and Comedy Central Asia. This is a new portfolio of partners which caters well to the lifestyle of the millennial segment. Enrich is constantly seeking new ways to engage and reach out to this target audience and Comedy Central Stand-Up, Asia! is the perfect platform,” said Arved Von Zur Muehlen, Malaysia Airlines Chief Commercial Officer.

“Being an award winning TV and video streaming service available on multiple platforms in Malaysia, we are committed in offering our viewers the best and exclusive world class entertainment on HyppTV. Comedy Central Stand-Up, Asia!

which is available on Comedy Central (HyppTV channel 609) is the latest unique program offered to our local viewers and the channel offers local and regional stand-up comedians another platform to showcase their talents. HyppTV viewers can also watch this one of a kind show anywhere via the HyppTV Everywhere mobile app, true to our promise, ‘Life Made Easier’,” said Jeremy Kung, Executive Vice President, New Media, TM.

“The production of live, exclusive events such as ‘Comedy Central Stand-Up, Asia!’ showcases Malaysia’s solid capabilities in hosting entertainment events for the international audience. It will also further strengthen our credentials and portfolio of events, as we continue our effort to complement the Ministry of Tourism and Culture Malaysia’s efforts to achieve 36 million tourist arrivals and RM168 billion in receipts by 2020,” said Tony Nagamaiah, General Manager, Malaysia Major Events, a division of Malaysia Convention & Exhibition Bureau (MyCEB), an agency under the Ministry of Tourism and Culture Malaysia.