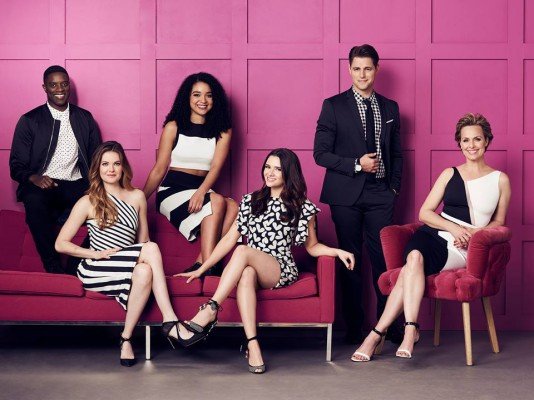 “The Bold Type” season 1 episode 3 airs on Tuesday, July 18 at 9:00 p.m. EDT on Freeform. The cable series, dubbed as the new “Sex in the City” centers on three young women working at the fictional publication Scarlet, which is inspired by the real women’s magazine Cosmopolitan.

Kat (Aisha Dee), as the social media director for Scarlet, will find herself the victim of internet trolls in “The Bold Type” season 1 episode 3 as she fights for gender equality. As a show about what goes on behind the scenes in a publication, producers thought it was important to make internet trolling a plot line.

“Everyone is a target on the internet,” showrunner Sarah Watson told Refinery 29. “Being a woman and ever having tweeted anything — I’m sure you’ve been through it — we are targets.”

Kat swears she’s into heterosexual relationships but, as shown in the previous episodes, she became strongly attracted to the brilliant lesbian artist Adeena (Nikohl Boosheri). Her encounters with Adeena might have ignited her strong feelings about gender issues.

Also in the previous episode, Jane (Katie Stevens) pushed to do a political piece but her editor Jacqueline (Melora Hardin) have since been assigning her relationship and sex stories. In “The Bold Type” season 1 episode 3, however, Jane will finally get what she wants when she’s assigned to interview a congresswoman. In order to stand out, Jane writes her story from a different angle. Will Jacqueline be impressed?

Meanwhile, Ryan (Dan Jeannotte) from the men’s magazine Pinstripe just below Scarlet’s floor will publish a rebuttal on Jane’s previous piece about not getting the best pleasure from sex. There might be a professional competition with him and Jane but the two will strike a casual and flirty relationship off work.

Sutton (Meghann Fahy), on the other hand, will find her dream job after giving up the lucrative chance to work in the magazine’s advertising department. But she will doubt if she’s up for the challenge and wonder if she made the wrong choice. Check out the preview to “The Bold Type” season 1 episode 3 below.