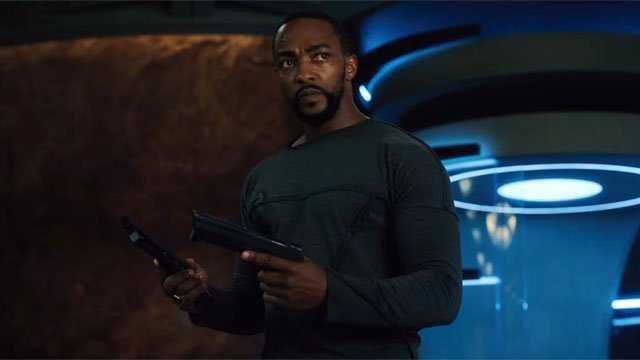 Altered Carbon is not coming back on Netflix after two seasons. The sci-fi series, which featured Anthony Mackie and Joel Kinnaman, is not getting a new sleeve.

News of the show’s cancellation comes six months after the Altered Carbon season 2 dropped on Netflix in February. According to reports, the streaming platform decided the fate of the series last spring but only announced the cancellation today.

Netflix decided to end the show due to the pandemic crisis. The cost of making the sci-fi drama didn’t balance out its viewership.

Altered Carbon was from showrunner Laeta Kalogridis, based on the novel by Richard K. Morgan. The show is set in the future where the minds of humans may exist in a new body, called a sleeve, long before their bodies die.

The story centers on Takeshi Kovacs, played by Kinnaman in season 1 and Mackie in season 2. Kovacs is the only survivor of a rebel group whose mind was revived into a new sleeve by a rich man who wanted him to solve his murder. In the second season, Kovacs tried to locate his girlfriend, believed to have been long dead.

The series takes place over 360 years in the future, with most episodes the first season set in the year 2384, in a futuristic metropolis known as Bay City. In the future, a person’s memories and consciousness are written onto a disk-shaped device called a cortical stack, which is implanted in the vertebrae at the back of the neck. These storage devices are of alien design and have been reverse engineered and mass-produced but can only be made from the material on Harlan’s world. Physical human or synthetic bodies are called “sleeves” and stacks can be transferred to new bodies after death, but a person can still be killed if their stack is destroyed and there is no backup. While this means anyone can live forever, only the wealthiest, known as “Meths” in reference to Methuselah, have the means to change bodies through clones and remote storage of their consciousness in satellites, so they never have to die of old age before being resleeved.

Takeshi Kovacs, a political operative with mercenary skills, is the sole surviving soldier of the Envoys, a rebel group defeated in an uprising against the new world order.[8] In the first season, set 250 years after the Envoys are destroyed, his stack is pulled out of prison by 300-year-old Meth Laurens Bancroft, one of the wealthiest men in the settled worlds. Bancroft offers him the chance to solve a murder—Bancroft’s own—to get a new shot at life. In the second season, set 30 years later, Kovacs, now in a new sleeve, continues to search for his lost love and Envoy leader Quellcrist Falconer.

Meanwhile, Will Yun Lee, who played the real Kovacs, posted his farewell on Twitter.

What a great ride it has been on #AlteredCarbon !! Thanks to all the fans that tuned in for both seasons❤️🤙🏽 Takeshi Kovacs, one of my fav characters I’ve gotten to play! ⁦@Skydance⁩ ⁦@netflix⁩ pic.twitter.com/k0Pab0u35B

Altered Carbon premiered in 2018. The series also had an animated spinoff titled Resleeved, which aired in 2019.