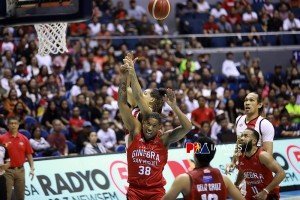 For Barangay Ginebra’s Joe Devance, being part of the Gilas Pilipinas Men national team as an assistant coach still gives him chills.

While his active playing career is far from over, the reality is that circumstances like FIBA eligibility have kept Devance out of the national team for the longest time.

And the no. 1 overall pick of the 2007 PBA Draft knew being tapped by head coach Tim Cone as one of his deputies for the biennial meet was a rare chance for the 6-foot-7 forward to represent the country.

And he is treasuring every moment.

“I am so thankful to be part of this national team! Seeing the flag on my jacket and knowing how much it means to this country gives me goosebumps,” wrote Devance on an Instagram post.

Im so thankful to be part of this National Team! Seeing the flag on my jacket and knowing how much that means to this country gives me goosebumps! You guys dont really know how happy I am right now!!!!!!!!! 🇵🇭🙏🏾😃🏀#gilaspilipinas🇵🇭

“You guys don’t really know how happy I am right now.”

Devance’s basketball IQ has been one of the reasons for his longevity in the league.

With Cone has his head mentor for his entire PBA career, the Fil-American has won a handful of PBA titles with Alaska, Magnolia (then San Mig Coffee), and Barangay Ginebra, including a grand slam run with the Coffee Mixers in the 2013-2014 season.

Devance has been used as a facilitator under Cone’s triangle, and his expertise of the game has been his calling card throughout a successful PBA career.