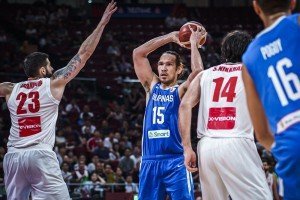 June Mar Fajardo has collected many accolades in what will go down as a Hall of Fame basketball career, but the 5-time PBA MVP is seeking to add a new achievement across his resume.

Talking to Spin.ph, the San Miguel Beermen center disclosed he has his eyes on a Southeast Asian Games gold medal, in his maiden stint in the biennial meet.

With the Philippines usually opting for amateur line-ups in the SEA Games level, not many pros have experienced competing in the tournament.

But some changes over the last few years and with the rising basketball programs in the respective neighboring countries, Gilas Pilipinas will be parading an all-pro unit for the meet, giving Fajardo and other guys a chance to represent the country.

Fajardo said per Spin.ph that he is confident in the host’s chances, but he is also wary the squad mentored by Tim Cone cannot just relax against the much improved competition.

Fajardo last played against similar competition during the 2017 SEABA Championships in Manila.

NBA: After Nuggets and Nets, Clippers shut down practice facilities due to positive COVID-19 test

NBA: Hayward to play in Orlando but intends to leave for birth of 4th child

NBA: Pacers’ Oladipo to join team in Orlando but sit out games