Parks on TNT KaTropa teammates: ‘Most of these guys, I look up to’ 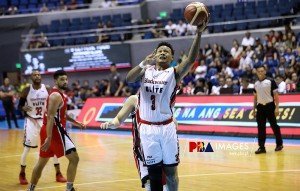 Newly-acquired TNT KaTropa wing man Ray Parks Jr. said he has been looking up to his new teammates when he was younger.
The fun and interesting quote came after Parks’ 1st practice session with the KaTropa earlier in the week, per Spin.ph.

Parks, 26, admitted that he used to travel from his home city of Paranaque to TNT’s practice facilities to catch a glimpse of then franchise mainstays like Willie Miller, Harvey Carey, and Jimmy Alapag.

“Most of these guys, I look up to,” said Parks to Spin.ph.

And now with veterans like the multi-titled Jayson Castro and former back-to-back Best Player of the Conference Jay Washington, Parks said he is eager to learn from those who have been to championship runs.

“Having these guys on the team, Jayson [Castro], J-Wash, it’s great. I can pick their brains and it’s surreal for them to put on a jersey right next to them.”

With Castro out because of an injury, Parks has an immediate opportunity to showcase what he can do as a court general and a young leader on the floor.

“I’m definitely prepared for that challenge. I really appreciate coach having the confidence in me to give me that big of a role.

Jayson is a huge part of our team and he is our leader. We go wherever he goes that’s for sure. For him to put that responsibility on me, all I can do is do my best.”