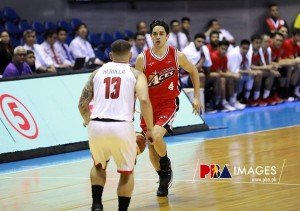 Player swaps in the on-going PBA Governors’ Cup continued with the Alaska Aces trading Chris Banchero to the Magnolia Hotshots for Rodney Brondial and Robbie Herndon, according to Philippine sports websites.

Banchero, who spent 5 years with the Aces, will be in only his 2nd franchise in his PBA career.

Brondial, on the other hand, will be joining the likes of Jake Pascual, Vic Manuel, and Abu Tratter what could be a frontcourt log jam for the Aces.

The former Adamson Falcon played only 3 games (5 minutes/game) in the conference.

Herndon meanwhile is expected to split minutes with Jeron Teng and Kevin Racal. Herndon averaged a shade under 10 minutes per outing for the Hotshots and averaged only 2.6 PPG.

The Aces have been struggling in the conference, mustering only a 2-6 record in the elimination round.

The trade makes the Aces roster look a bit deeper, a better problem to have than having scarcity in talent.