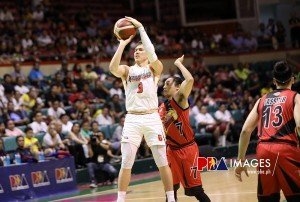 Northport Batang Pier super rookie Robert Bolick is confirmed to have injured his right ACL according to a report by Inquirer.net and will be forced out for at least the next 8 months.
Bolick, 24, was hurt in Northport’s eventual 127-119 win over the San Miguel Beermen last week in the on-going PBA Governors’ Cup.

Citing a source, the Inquirer added the 3rd overall pick of the 2018 draft class will have surgery on Wednesday.

The scoring guard had been having a splendid rookie season in the big league. He carried Northport to a franchise record 9-2 slate in the elimination round of the 2019 Commissioner’s Cup where he normed 17 PPG, 5 RPG, and 4.6 APG.

Northport is currently in 8th place in the conference with a 3-4 record, 1.5 games behind the next 4 squads in the bottom of the team standings.

Such loss would only mean the Batang Pier must draw better games from the rest of their reliables.