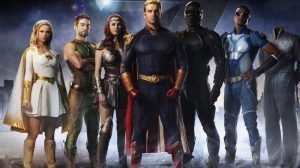 Fans are highly anticipating the return of the second season of Amazon’s superhero series “The Boys.” Showrunner and executive producer Erik Kripke revealed that the announcement of the release date is near.

“I get asked a lot, so #TheBoysTV update: finishing #Season2 remotely,” Kripke posted on Twitter. “Still some VFX & sound to do, but we’re SO CLOSE! Airdate (& other cool shit) will be announced SOON!”

I get asked a lot, so #TheBoysTV update: finishing #Season2 remotely. Still some VFX & sound to do, but we’re SO CLOSE! Airdate (& other cool shit) will be announced SOON!#TheBoys @TheBoysTV @PrimeVideo #SPNFamily @Sethrogen @KarlUrban @JackQuaid92 @antonystarr @ErinMoriarty_ pic.twitter.com/mpS8lHgZT7

Release schedules of a lot of movies and television shows have been pushed back because of the coronavirus pandemic. However, “The Boys” have been in post-production when the shutdown and lockdown orders were imposed by governments across the world.

Thus, “The Boys” is still all set to release close to its schedule since it finished filming last Fall. The show has, in fact, released a few teasers for the second season.

“The Boys” is based on a comic book series written by Garth Ennis and Darick Robertson. It centers on a group of vigilantes that are going after the Seven, who were once beloved superheroes with dark secrets.

Amazon premiered the show in the summer of 2019 and became one of the biggest shows on its streaming platform Amazon Prime. Before the series debuted, Amazon had actually renewed the series and production was underway even then.

Urban previously said that he is expecting “The Boys” season 2 to be out sometime in the middle of 2020. The first season was available in July, hence, it might likely follow the same release schedule.

The upcoming installment of “The Boys” will be more action-packed and filled with intriguing plot developments, further hooking its fanbase. Its unique storyline has been one of the reasons why the show has shot up to Amazon Prime’s top most wanted list.