Picodi.com team has decided to find out if this money is enough to afford the minimum comfort of living, as well as how the minimum wage rates have changed in various countries in 2020.

The study included 54 countries where the national minimum wage exists. It turns out that taxation varies significantly from country to country. For example, in the Philippines and Hong Kong, the minimum wage is exempt from the personal income tax. In other places, the difference in gross and net salary could reach even 40 per cent (Romania). For this comparison to be adequate, we took into consideration net pay, which is the money an employee takes home after all deductions. 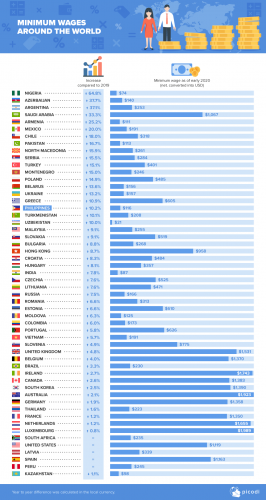 In 2020, the highest year to year increase in the minimum wage was noted in Nigeria (64.8 per cent). However, after converting into USD, this amount is still one of the lowest ($74). In some countries, like the US, Spain, South Africa or Latvia, the minimum wage remained unchanged. In Kazakhstan, the minimum wage didn’t change, but the actual amount that a worker gets into his pocket decreased, because of higher health insurance.

The Philippines ranked 17 out of 54 countries included in the report. In 2020, the monthly net pay is 10.2 per cent higher than in the previous year (₱5,922 compared to ₱5,376 for a full-time employee, based on the lowest possible wage). In comparison, the minimum wage increased by 9.1 per cent in Malaysia, 8.7 per cent in Hong Kong, and 1.6 per cent in Thailand.

Just like the previous year, we decided to confront the minimum wage with food prices. The shopping basket created for the purpose of this report consists of eight items: bread, milk, eggs, rice, cheese, meat, fruits and vegetables. Even though this list is short and frugal, these products meet the nutritional needs of an adult and their prices are constantly monitored around the world.

At the beginning of 2020, food prices from the list are as follows:

The total price of basic food products amounts to ₱32,421, which is 1.76 per cent more than in the previous year. 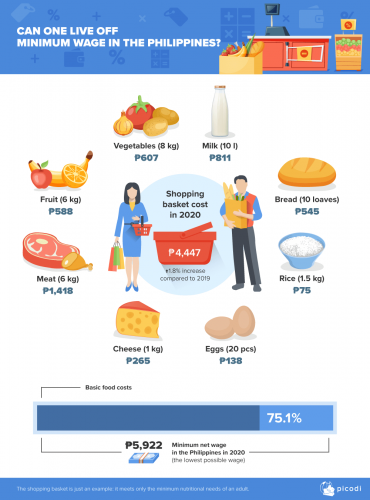 Food spending around the world

There are just as many different ways to spend money as there are definitions of the comfort of living. Nevertheless, we compared the prices of the same products in various countries and checked what part of their budget people would have to spend on essential food products. 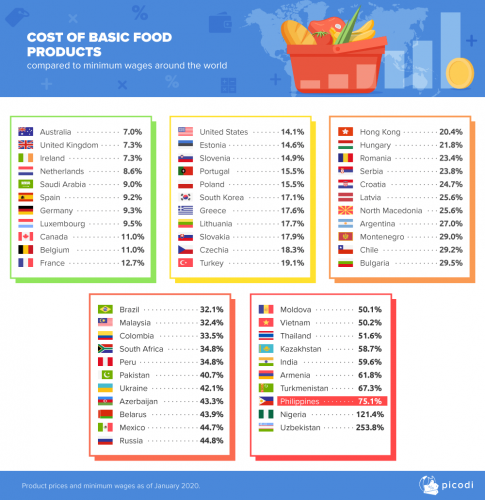 In this comparison, the Philippines placed 52nd. The best ratio of food prices to the minimum wage was noted in Australia, followed by the United Kingdom and Ireland. In these countries, the basic food products are worth around 7 per cent of the minimum wage.

In some countries, like Nigeria or Uzbekistan, the minimum wage is so low that it does not cover the costs of even the most basic shopping basket.

For the conversion to local currencies, we used the average Google Finance rates for the fourth quarter of 2019.