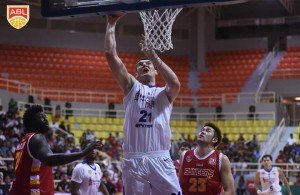 Wyatt finished with a game-high 28 points, 6 rebounds, 4 assists, and 7 triples.

It was the 2nd straight win for Alab, which will be back in action on Tuesday against Mono Vampire, in the ASEAN Basketball League Season 10.

The win also saw the debut of Sam Deguara, who despite getting limited minutes due to foul trouble, still put up 12 points and 11 boards.

Jordan Heading had 10 markers while Jason Brickman had 9 points and 11 dimes.

Xavier Alexander and Anthony McClain led Singapore with 26 and 25, respectively for the Slingers’ season debut.