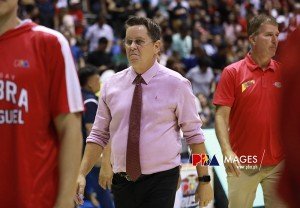 Even if Tim Cone is the winningest head coach in the PBA, the Barangay Ginebra mentor admits still getting nervous when coaching the national team.
Cone admitted he still felt the nerves when tasked to lead Gilas Pilipinas in the Southeast Asian Games in the Philippines, a tournament where the nation is heavily favored over its neighbors.

“I was telling someone that I’m here in the SEA Games and I know there’s a good chance that I’m gonna win, and still, I had bundle of nerves. I got a bad stomach and I’m so nerbiyosa, and then I think, ‘What about Yeng Guiao?” said Cone to ESPN5.

The Philippines, as expected, went on a romp, beating their opponents convincingly each night for another gold medal finish, the 18th overall for men’s basketball in the regional event.

It isn’t the first time Cone has handled the national team. In 1998, he led the RP Centennial Team in the Jones Cup and other tournaments.

Cone even furthered that comparing what he has accomplished to what Yeng Guiao and Chot Reyes went through before is “not fair at all.”

“Coach Yeng and he’s coaching against those magnificent teams like Serbia, Italy, and I mean, Chot before him, I just don’t know how those guys got through that, and so to compare what we’ve done to what they’ve done is not fair at all. Zero fairness,” said Cone per ESPN5.

“It’s really about the level of competition. Coach Yeng and Coach Chot were playing against the the best in the world and we’re not playing on that level. Of course, we’re gonna look better and play better because our competition isn’t as great as Serbia and Italy (in Southeast Asia).”

It’s nice to see that Cone is just as human like all of us when playing or coaching basketball.