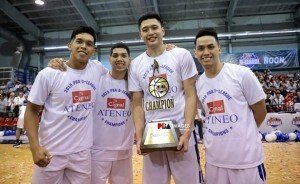 Go went 1st overall in the special Gilas draft agreed upon by the PBA and the Samahang Basketbol ng Pilipinas (SBP) earlier this week.

He will be loaned to the national team as part of their preparations for the 2023 FIBA World Cup but Columbian will retain his rights once he returns to play pro.

Columbian then added another vital asset to secure their future by drafting Roosevelt Adams 1st in the initial round of the regular draft.

The Elite then selected 6-foot-8 Fil-American Maurice Shaw, who had stints with the Harlem Globetrotters and the Thai Basketball League.