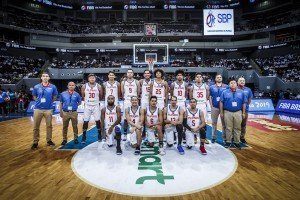 The host country got off to a rousing start in their bid for another gold medal in the sport, with Slaughter particularly putting up 9 points and 8 boards in just over 10 minutes of action.

Cone later told Spin.ph that had the Barangay Ginebra center been healthy weeks before the SEA Games, the mentor would have put him in the Final 12 outright.

“He would have been part of the original 12 if he had been healthy at the time. Now that he is healthy, we need his size on the national team,” said Cone.

Slaughter was only a late replacement for Roger Pogoy who made the initial final roster but got injured in the PBA Governors’ Cup quarter-finals.

With a good showing in his 1st game back for Gilas since the FIBA World Cup Asian Qualifiers, Slaughter definitely looks like a solid fit for this version of the national squad.

The Philippines will play Myanmar on Friday night as they continue their elimination round campaign.