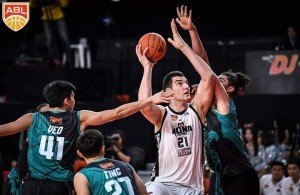 In a key move that sent shockwaves around the league, San Miguel Alab Pilipinas has tapped the services of 7-foot-6 giant Sam Deguara to bolster their 2019-2020 ASEAN Basketball League (ABL) campaign.

Deguara played for Mono Vampire during the 2017-18 season, dueling with Alab for 5 games in the finals series that year.

He also suited up for Hong Kong Eastern the following year.

Deguara will replace Adrian Forbes and join Nick King and Khalif Wyatt in the import rotation.

He will now be officially the tallest player to suit up for Alab following the 7-foot-3 PJ Ramos last season.

The Philippine club currently has a 1-1 record early in the elimination round.