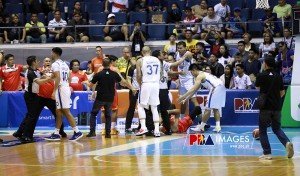 The top-seeded Road Warriors blew a twice-to-beat edge after being dominated by Northport, 115-90.

In the 2nd half of that game, Erram was caught hitting Northport import Michael Qualls at the back of the head during a heated scuffle.

He was eventually fined 50,000 pesos for that, plus a single game suspension which meant he would be missing the do-or-die game later tonight.

“To Michael Qualls, I am sorry for hurting you in our last game. I also want to apologize to coach Pido (Jarencio) for my behavior,” adding that his 1st instinct was to defend his teammates and that got the best of him.

Paulit-ulit kong pinag-iisipan ang nangyari sa last game namin. Nagsisisi ako sa mga nagawa ko. To Michael Qualls, I’m sorry for hurting you in our last game. I also want to apologize to Coach Pido for my behavior. My first instinct was to defend my teammate and I let my emotions get the better of me. My temper is not an excuse. Humihingi din ako ng paumanhin sa teammates, coaches at management ng NLEX, pati rin sa PBA at sa lahat ng fans. Bilang atleta at tatay, responsibilidad kong maging good example sa iba. I am truly sorry. This is on me. I promise you this will be the last of my unnecessary actions and I’ll do my best to earn back your trust.

Erram went on to apologize to NLEX, and the entire PBA organization and community, mentioning that he has a responsibility to serve as a role model, being a player and a father.

“This is on me. I promise you this will be the last of my unneccessary actions and I’ll do my best to earn back your trust.”