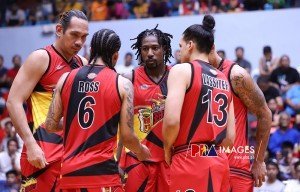 The San Miguel Beermen management have issued suspensions to players Arwind Santos, Ronald Tubid, and Kelly Nabong for their involvement in an intra-squad scrimmage brawl last week at The Upper Deck.
It was reported last week that the Beermen’s initial import for the PBA Governors’ Cup, Dez Wells, was decked by Santos with a hard screen during their practice game.

A fight broke out with Santos and Tubid getting involved while Nabong retaliating on Wells’ behalf.

The grand slam-seeking Beermen will play John Holland against the TNT KaTropa.

The timing of the suspension is a huge blow to the Beermen’s rotation.