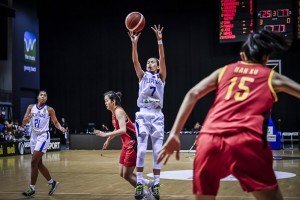 Gilas Pilipinas Women suffered its worst loss in the FIBA Women’s Pre-Olympic Qualifying Tournament for Asia-Oceania following a big defeat at the hands of China, 127-49 Sunday at the Trusts Arena in New Zealand.
Similar to their blowout loss to Korea just about 24 hours ago, the Philippines couldn’t get rhythm early, and fell behind by a big margin after the 1st quarter, 36-10.

China, regulars at the Olympic Basketball Tournament, made full use of their height advantage against the much undersized Filipinas.

Han Xu flexed her muscles for an easy 26 points, 9 rebounds, and 2 blocks. Li Yeuru added 14 while 5 others scored in double-digits.

China shot an immaculate 58% from the field including 44% from downtown.

The Philippines struggled offensively, shooting only 25.7%, its worst percentage in 3 games.

Sharpshooter Janine Pontejos was the only double-figure scorer for Gilas with 16 points. Afril Bernardino added 8.