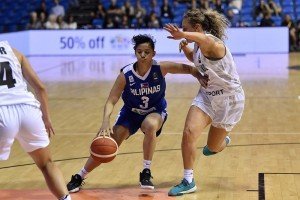 Gilas Pilipinas Women was dominated by host nation New Zealand, 111-54 in the opener of the FIBA Women’s Olympic Pre-Qualifying Tournament for Asia-Oceania Thursday at The Trusts Arena in Auckland.

Boagni shot a perfect 6/6 from the field while Davidson finished with a double-double with 11 rebounds.

Afril Bernardino paced the Philippines with 17 points while Khate Castillo and Kelli Hayes both had 10 markers.

However, New Zealand shot a hot 54.1% clip overall throughout the game, compared to just 31.2% for the Filipinas.

Next for the Philippines is Korea on Saturday.

Only the top 4 finishers out of the 8 team field will advance further to the Olympic Qualifying Tournament, which is the next step towards a ticket to the 2020 Tokyo Olympics.