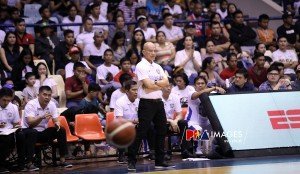 In spite of a league-best 8-1 record deep into the PBA Governors’ Cup elimination round, NLEX Road Warriors head coach Yeng Guiao knows the team cannot get carried away just yet.

Following a dramatic win over the Magnolia Hotshots over the weekend, the Road Warriors’ chief tactician noted that his squad still lacks the experience similar to that of perennial contenders, and that they should continue getting better.

“No, never, that’s the worst thing you can think of at this time. We’re still a team that’s learning, a team that sabi ko nga, kulang kami sa experience eh,” said Guiao per the PBA website.

With NLEX’s win, a twice-to-beat advantage entering the quarter-finals is quite in place already.

There have been many close battles for the Road Warriors, but Guiao commended the mental toughness and resiliency of the squad, particularly in come-from-behind wins over Magnolia and Ginebra where they trailed by double-digits.

Guiao thinks it’s a manifestation of NLEX being ready to reach new heights and leave past failures behind.

“It’s just the guys believing in each other, not giving up. It’s also part of the journey of this team na palagay namin oras na, napapanahon na rin nan mag-step up kami sa disappontment in previous conferences eh,” he said, per the PBA website.