PBA: Ravena thanks Jericho Cruz for NLEX game-winner over Magnolia 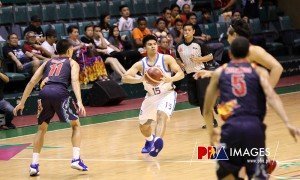 NLEX trailed by as much as 26 points before buckling down to work and making it a close and thrilling battle towards the end.

With the Road Warriors down by 2, 85-83, Ravena was fouled and sent to the free throw line.

He made the 1st charity, but clanked the 2nd, but the ensuing rebound play led to Cruz grabbing the ball mid-air and sinking a miraculous follow up shot to hand NLEX the win.

NLEX moved to solo 1st with an 8-1 card in the PBA Governors’ Cup team standings.

Ravena was also seen doing a choke gesture to which he responded by saying he cannot afford missing free throws against a team like the Hotshots but he was just fortunate Cruz came to the rescue.

Free throws to save my lifeeeeee 😳😳😳 this was me after my missed free throw to my family btw. Not against magnolia fyi. 🙏🏽