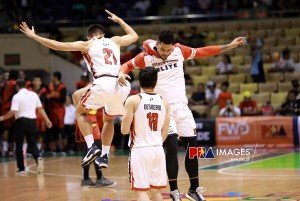 Blackwater Elite owner Dioceldo Sy made a bold statement in light of the reshuffling done recently, saying his team is not “playing to lose” and that they cannot wait to surprise PBA fans.

Speaking to ESPN5, Sy said the recent flurry of trades were done in preparation for the Elite’s planned European style of play for the conferences to come.

The Elite traded key players Mike DiGregorio, Allein Maliksi, and Ray Parks Jr. in a matter of 2 weeks, getting in return a handful of role players like Brian Heruela, Don Trollano, Anthony Semerad, Mike Tolomia, and KG Canaleta, aside from a slew of picks.

“I believe we got a better team for our planned Euro basketball system.

We feel we will have a better rotation and more team play because we’ll have less dribble and more quick passes, more cuts, more screens and drive to the basket.”

Sy went on to call both Trollano and Tolomia “underrated star players” and vowed that in the next conference, the Elite will try to shock the opposition and critics alike.

“We will be strong in the All-Filipino (conference) next season.

I can’t wait to prove our critics wrong.”