PBA: Parks takes blame for TNT loss; Dickel expecting him to get better 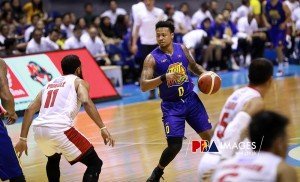 The KaTropa were in control for most of the contest but the crowd favorites battled back and eventually won, 96-93 in the on-going PBA Governors’ Cup.

“I take full responsibility for the loss. TNT is a great group and I’m still adjusting, but the guys did a great job of taking me in. I gotta step into the plate and do better,” said Parks per the PBA website.

Parks struggled a bit in the earlier parts of the contest but managed his way to 17 points on 50% shooting including 4 triples.

TNT consultant Mark Dickel meanwhile had positive words for Parks given the circumstances, and he expects the wing man to be even better in the days to come.

“Pretty good … He’s had three practices and it’s never easy. We run some different stuff from what he’s used to and it will be obviously much easier if Jayson (Castro) were there, just allowing him to play more the natural role he’s gonna play when he (Castro) comes back. So we’re kinda scrambling on two fronts now. I was happy with him. I thought he played good especially in endgame. He gave us a chance to get back and tie up. I was happy with him,” said Dickel.