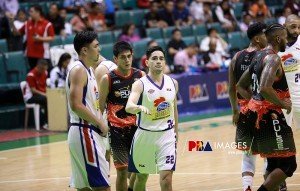 New Magnolia Hotshots Pambansang Manok guard Chris Banchero said he felt good about his debut for his new team after the squad beat Phoenix, 97-81 on Wednesday.

Banchero had an all-around performance with 10 points, 5 rebounds, and 3 assists, sharing the backcourt duties with mainstays like Paul Lee, Mark Barroca, and Justin Melton.

Acquired from the Aces for Rodney Brondial and Robbie Herndon, Banchero spoke highly of Magnolia’s defensive identity, adding he is hopeful it leads them to a title.

“It felt good. It looked good. I think we are really tough defensively. We are going to give people a hard time. We have a lot of quick guards and it’s going to be tough. We hold them to 81 points. If we can stay in that area, that’s how you win championships. Defense and rebounding.”

Banchero added his new backcourt partners made the transition quite easy as he had small amount of time to get accustomed to Magnolia’s system.

“It’s good. Paul and Justin (Melton) have really been there non-stop, helping me learn the plays in two days. It’s tough to try to learn 10 plays and 10 defensive schemes but at the end of the day, we are playing out there so it wasn’t too hard.”

The Fil-Italian guard also reiterated he does not feel compelled to score a lot but he would rather just do what is asked from him on the floor.

“I didn’t have to try to do too much. There’s a lot of other guys who can create and make plays. For me, it makes my job a lot easier. I’m still getting used to it. I feel brand new. It’s going to take a little time to develop that chemistry. I feel once that happens, I think we are going to be a tough ballclub.”